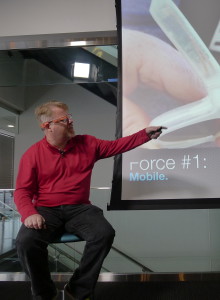 He may not have Doc’s scraggly white hair from “Back to the Future,” but Robert Scoble could be a kindred spirit.

“My job is to go learn about the future,” he said at Zillow’s Seattle headquarters. As startup liaison officer for Rackspace, Scoble is paid to travel around the world in search of cutting-edge technology.

He first learned about Google Glass years ago when it was code-named “Wing Man.” He says Xbox will eventually be able to tell your heart rate from across the room by detecting color changes in your skin.

“We’re going to have custom products with sensors in them,” he explained. “You will be able to see everything. The amount of data we have is massive.”

Scoble started channeling his fascination with gadgets on his blog, Scobleizer. In 2003, he went on to work as a technology evangelist and co-founder of the Channel9 video community at Microsoft.

You may have read Scoble’s book, “Naked Conversations,” about how blogs have changed the way companies talk with consumers. Many believe the book was ahead of its time, predicting the power of social media.

So, what does Scoble’s crystal ball say about the future of technology? An iPhone will be used as a light meter for photographers, and a sensor will be able to you tell whether you are going to have a heart attack 24 hours before it happens.

See what else Scoble says is going to be the next big thing in this video:

Or check out Zillow’s job page, so you can hear speakers like Scoble in person. We’re hiring!