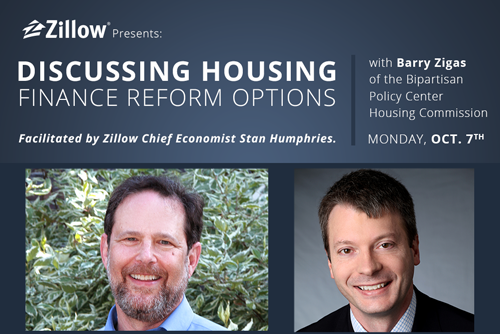 Without some kind of government involvement in the U.S. mortgage finance system, private lenders would not be able to provide Americans with access to low-cost, 30-year fixed rate mortgages, according to Barry Zigas, director of housing policy for Consumer Federation of America.

Zigas, a member of the Housing Commission at the Bipartisan Policy Center (BPC), recently sat down with Zillow Chief Economist Dr. Stan Humphries to discuss the BPC’s plan for reforming government sponsored enterprises (GSEs) Fannie Mae and Freddie Mac. Fannie and Freddie currently back the majority of mortgages originated in the U.S. but have been under government control since 2008, costing taxpayers more than $150 billion.

According to Zigas, the goal of all the plans proposed so far is to increase the amount of private money in the housing market and decrease the government’s involvement. But unlike more conservative plans, Zigas said the government still has a necessary role to play.

Under the BPC plan, Fannie and Freddie would be replaced by one organization, responsible for ensuring that investors in pools of mortgages, known as securities, would realize returns on their investments no matter what, which would help them feel safe investing in the securities to begin with. This new entity would only step in to pay investors once all other sources of private money were used up.

Zigas said the BPC plan was crafted specifically to ensure that Americans would continue to have access to the 30-year, fixed rate mortgage, which for decades has allowed millions of low and middle-income home buyers realize homeownership.

“It’s very important for the American consumer that [the 30-year, fixed rate mortgage] is one of the few benefits of financial regulation and government intervention that flows to them and not to financial institutions,” Zigas said.

The topic of GSE reform has been building momentum in both houses of Congress, and Zigas said he was encouraged to see the various plans because the issue is too important not to address.

“The housing finance system is one of those things like your plumbing that you only notice when it doesn’t work,” Zigas said. “And you don’t want to have it completely turned off or screwed up in some major way when you need it.”

You can view the full discussion here.