I’m looking at the computer screen as I fill out another Zillow employee satisfaction survey. I forget the exact question — something related to “what can be done to make Zillow a better place to work,” or maybe it was about “how we can hire better”.

Regardless, the answer in my mind is obvious.

In addition to Grace Hooper and SHPE, we need to go to NBSE.

You can Google “National Society of Black Engineers” and find their mission statement and promotional materials. Every year NSBE has a national convention. Most people attend for one of three reasons:

I had already been to NBSE for the first reason. Now I was ready to take Zillow there for the third.

A chance to compete

Months later, I board the plane to Kansas City, MO. My flight itinerary says that it will land at March 29, 2017 10:53 p.m. but emotionally I feel like I’m flying into the past.

My reason for telling Zillow to go to NSBE was admittedly personal. There is little doubt in my mind that if it weren’t for NSBE and organizations like it, I would not be in tech.

I think back to 2008. I was strapped for cash. I didn’t want another telemarketing job next year. Sadly, landing a paid internship was proving impossible. It wasn’t that I had trouble passing my on-site interviews — I wasn’t even getting to the phone screen. It was frustrating. I wasn’t looking for someone to hand me a job. The problem was that at every turn I was denied a chance to compete.

Luckily for me, I was living in Stanford’s Ujamaa dorm – the de facto home of Stanford’s Society of Black Scientist and Engineers (SBSE). With them I went to my first NSBE convention. For the first time, recruiters weren’t giving me the runaround. The same high-profile tech companies that threw out my resume at other career fairs were now calling me back. Through NSBE I got my first internship with Amazon, where I would work until switching to Zillow in 2014.

In 2017 I’m headed to a convention with 12,000 engineers to recruit for Zillow Group. But I, like so many others, am headed to NSBE for bigger reasons. 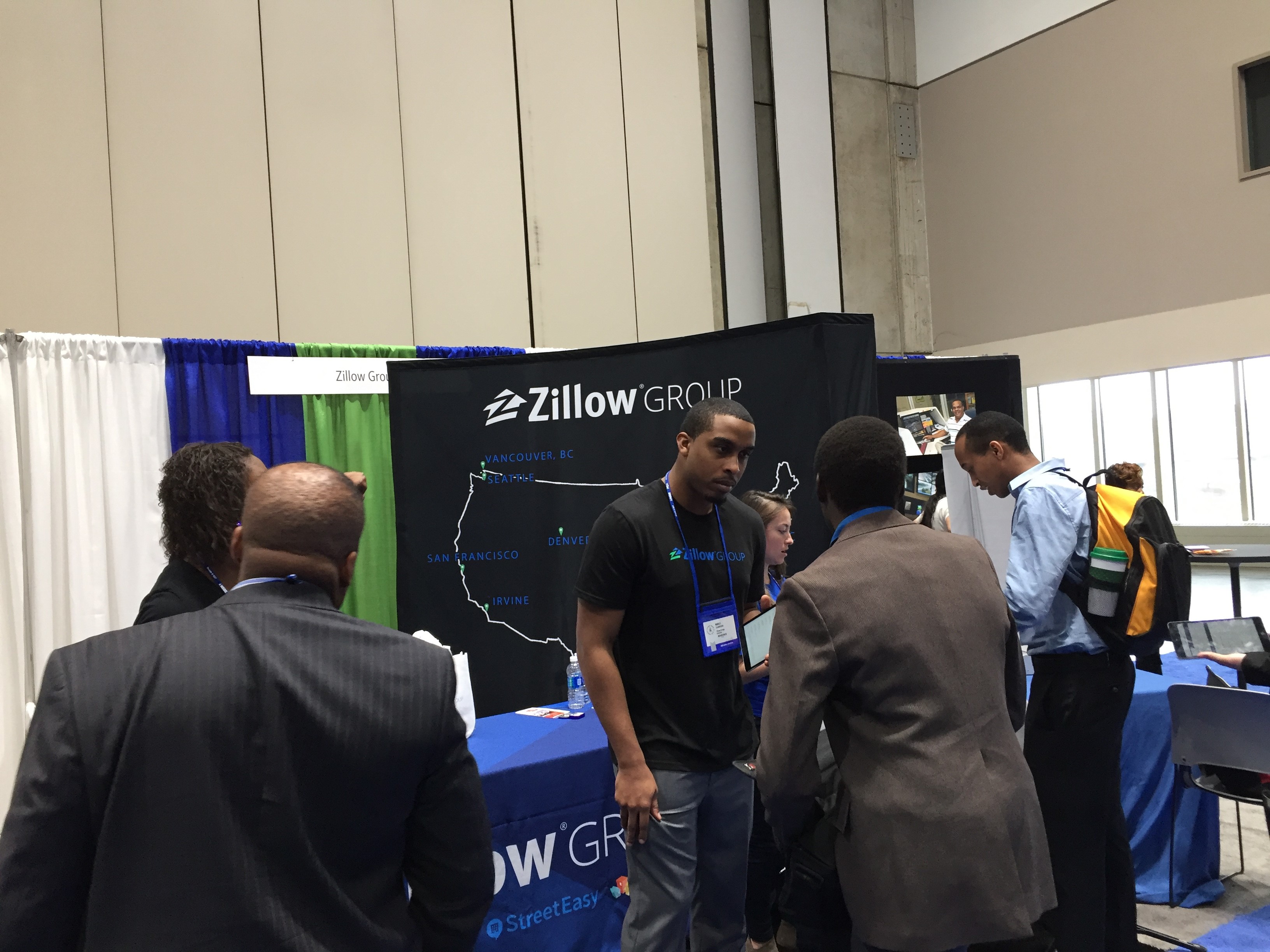 Day 1. Around 11:45 a.m., we hear NBSE members chanting. The floodgates open and thousands of engineers pour onto the career fair floor.

I take an eight-minute video of the convention floor in a futile attempt to convey its bigness. Some of the booths have TVs, VR headsets and trucks. Other booths are downright peacocking. A machine with a tesla coil contraption periodically plays 8-bit nerd-pop songs.

Word begins to spread that Zillow Group is at NSBE. A steady stream of Zillow and Trulia customers come by to tell us how much they love us. They are shocked to discover that this is our first time at NSBE. They encourage us to come next year.

On day 1 we collected 100+ resumes. We didn’t need the extra encouragement.

The light stuff. The heavy stuff.

After being on the convention floor for seven hours, the Zillow Group recruiters have one thing on their mind: our 7 o’clock dinner reservation. We’re in Kansas City. We can’t leave without getting some Kansas City BBQ.

Along the way, we pick up a couple of +1s and head for dinner. The surprisingly good wine and unsurprisingly great BBQ start to flow. My linguistic transformation from West Coast nerd-speak to academic African-American vernacular is complete.

We talk about the light stuff: golf, wine, that crazy tesla coil machine.

We talk about the heavy stuff. One of our +1s tells us his story. He went to a high school where the most advanced math class was Algebra 2. Despite being set up for failure, he got an exemplary score on his SAT, graduated from West Point and spent multiple tours in Afghanistan and Iraq. His story, like the stories of my extended family members and friends, reminds me just how integral education is to social-economic upward mobility. I can only imagine how many people on that career fair floor came from failing schools in neighborhoods left behind by the powers-that-be. How many came from countries far away in search of the American Dream. How many came from good homes and want to keep that winning streak going.

On Day 2, I meet more recruiters and educators. Our goals were surprising similar. We might be at the national convention to recruit engineers, but we are also at NBSE to do what others did for us — and what others should have done for those who were left behind.

I’m reminded that my first college dorm was named after the fourth Kwanzaa principle: “Cooperative Economics.” For the first time, I really come to grok what that Swahili word means. What we are doing at NSBE is not charity. It’s better than that: It’s social-economic upward mobility. It’s Ujamaa.

By convention’s end, all the Zillow Group recruiters have come to the same conclusion: We have to come back next year. We have a couple hundred resumes digitally in hand. We’ve blasted that Zillow is hiring to thousands of people. Thanks to our swag and politicking, a large group of 20-somethings have Zillow on the mind.

The next day, I’m back in Seattle. It feels pretty surreal.

I went to a convention with 12,000 engineers to recruit for Zillow Group. But I also headed to NSBE for a bigger reason.

Many go to NSBE to become professional engineers.

Many more go to get hired as engineers.

Some go to recruit engineers.

But I, like so many others, go to NSBE to pay it forward.

Jasmine Mann is a Senior Software Development Engineer at Zillow. Learn more about Jasmine on our Engineering Blog.