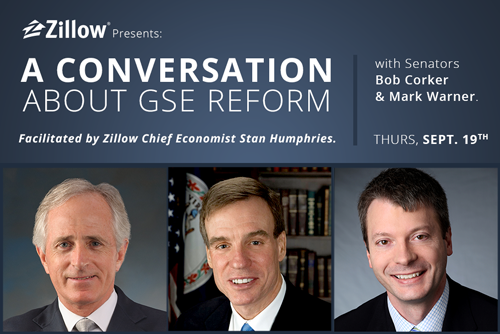 Earlier this week, Sens. Bob Corker, R-TN, and Mark R. Warner, D-VA, sat down with Zillow Chief Economist Dr. Stan Humphries to discuss their ideas of what the future of mortgage finance reform should look like in this country.

In 2008, Fannie Mae and Freddie Mac were placed under government conservatorship after rising defaults and foreclosures caused them to become insolvent. The government injected more than $150 billion in taxpayer funds into the companies to keep them afloat and ensure mortgage liquidity during the housing recession. It was hoped the measure would be temporary, but five years later, Fannie and Freddie are still under government control.

At the heart of the Corker-Warner plan is the creation of a new government entity, the Federal Mortgage Insurance Corporation (FMIC), that would replace Fannie Mae and Freddie Mac. The FMIC would provide a federal backstop for investors in certain mortgages, like the GSEs currently do, but that backstop would only be triggered after private investors had already absorbed the first 10 percent of any potential losses.

During the discussion, Corker and Warner estimated this 10 percent risk retention would far exceed what would have been required even during the worst of the last housing recession, ensuring taxpayer funds going forward are only required in the most dire of circumstances.

The new system also would separate many of the functions currently grouped together under Fannie and Freddie, including mortgage securitization, insurance and funding for affordable housing. Corker labeled the current system a “duopoly” and said it had become largely unmanageable. Warner said Fannie and Freddie had grown into a system that nobody envisioned at their outset.

This discussion comes at a time of growing sentiment that keeping Fannie Mae and Freddie Mac as they are and returning to the pre-crisis status quo is increasingly unacceptable. The Corker-Warner plan is one of a handful of plans raised in recent months, including a bill introduced in the House of Representatives by House Financial Services Committee Chairman Jeb Hensarling, R-TX. Hensarling’s plan would also abolish Fannie Mae and Freddie Mac, and replace them with a fully privatized mortgage finance system.

“Now is the time to be talking GSE reform,” Humphries said. “The housing market recovery is moving forward on its own two feet, and we need to move past the temporary fixes that were put in place during the crisis and create a functional and sustainable mortgage finance system. It’s now a matter of figuring out how and when to make those changes.”

This conversation comes after Zillow hosted President Barack Obama last month to talk about housing. GSE reform was a prominent point of discussion, and 12 percent of the thousands of questions submitted by people for the president addressed Fannie Mae and/or Freddie Mac.

You can view the full Corker-Warner discussion here.