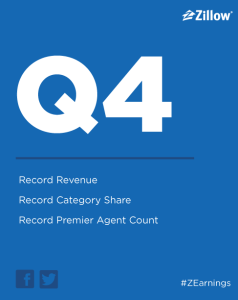 Today, Zillow is announcing results for the fourth quarter 2013, as well as the full year. This was a breakaway year for Zillow, in which we repeatedly delivered record revenue, traffic and mobile usage, as well as growing our market share as the category leader. You can see the full press release here. Some highlights from the quarter are below.

CEO Spencer Rascoff will be hosting our fourth quarter conference call with Zillow CFO Chad Cohen today at 2 p.m. PT/5 p.m. ET. A link to the webcast is located in the investor relations section of Zillow’s website, and a replay will be available after the call.

This quarter we’re happy to be partnering with TheStreet to allow more investors and interested parties to participate in the conversation and connect directly with Rascoff and Cohen. One year ago, Zillow became the first company to take questions during an earnings conference call using social media. We’ll continue that this quarter, and will consider questions submitted via Twitter, using the hashtag #ZEarnings, and Facebook, in addition to questions submitted by those dialed into the call.

Additionally, Rascoff will jump on Twitter immediately following the call to answer additional questions. The live Twitter chat will be moderated by @TheStreet and will also use the #ZEarnings hashtag.