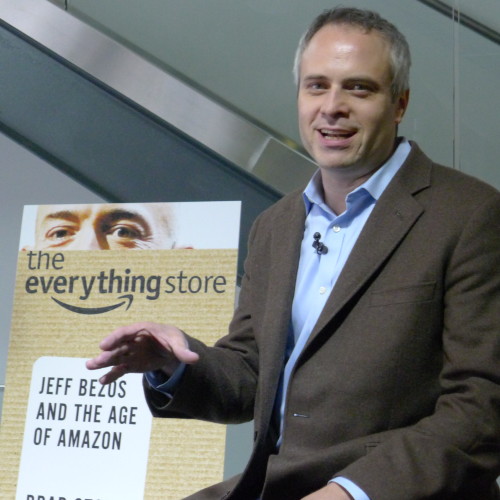 When you’ve reported technology news for nearly 20 years, you’re bound to get a behind-the-scenes look at what makes leading companies tick. Bloomberg Businessweek senior writer Brad Stone decided to take his insider knowledge of Amazon.com and write a book about it. Titled “The Everything Store: Jeff Bezos and the Age of Amazon,” the book provides a glimpse at the inner workings of the world’s largest online retailer.

“Like many retailers, Amazon is quiet and secretive,” he said during a presentation at Zillow’s Seattle headquarters.

Stone started covering the company in 2001 when he was a reporter at Newsweek. He intended to focus his book on Amazon’s journey to success, rather than its founder and CEO, but quickly realized he couldn’t separate the two.

“If you change the world as Jeff Bezos has, you want to know where he comes from. How is someone so relentlessly driven?” Stone said. “He is on a different plane.”

According to Stone, Bezos has always believed in a vision of “the everything store” and pushed it forward. He’s known for testing everything a million times and having what Stone describes as a “relentless and sometimes unpleasant drive.”

“It’s why Amazon is such an uncomfortable place to work and why it’s such a successful company,” he explained. The company, Stone said, has seen a high degree of turnover, yet its success in the e-commerce space is undeniable.

After Apple disrupted the music industry with the iPod, Stone says Bezos went against the world to give a green light to the e-book business. He also has had a huge impact on the Amazon culture, introducing six-page documents called “narratives” to begin meetings and sending emails with a question mark in the subject line to indicate employees should drop everything to fix a problem.

“He’s always relentlessly propelling the company’s inventiveness,” Stone said. “With the pace of the Internet, you can’t stand still. He never stood still.”

To hear more of Stone’s perspective on Amazon, you can watch his full presentation here: