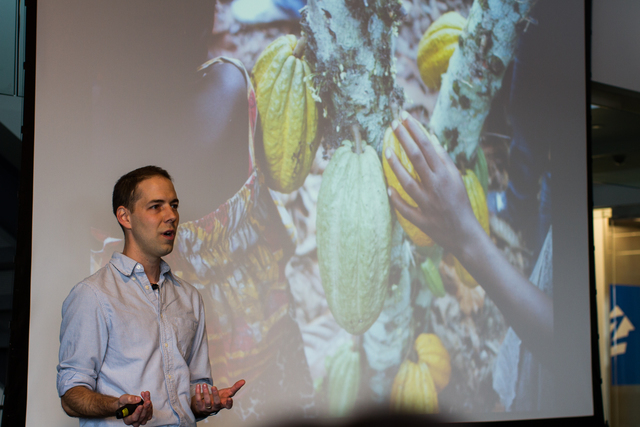 The ethical sourcing of chocolate is important for many reasons: the health of our bodies, the health of the planet, and the financial and physical well-being of cocoa farmers, among others.

So it was with great interest that Zillowites packed the house to hear guest speaker Nathan Palmer-Royston, the cocoa sourcing manager for Theo Chocolate, the country’s first organic and fair trade-certified chocolate factory — and a source of Seattle pride, located just four miles north of Zillow Tower.

Palmer-Royston spends much of the year in tropical zones, working with farmers and extension officers in countries where cocoa is grown.

Theo buys its cocoa from Panama, Peru and the Democratic Republic of Congo. Palmer-Royston works to source cocoa elsewhere, but said not all cocoa farmers and cooperatives are interested in meeting its standards for quality, transparency, and organic and fair trade certification.

A seemingly simple difference that Theo makes is talking to cocoa growers about the cocoa market and the final product. One grower in Congo told visitors from Theo that he thought his cocoa was used to make shoe polish, because he’d seen a brand called Chocolate. (Last year, a video went viral of Ivory Coast cocoa growers tasting chocolate for the first time.)

Cocoa is considered to be 20 to 25 years behind coffee in terms of the sophistication of its growers and tasting (with coffee, cupping) methods, and the recognition of defects from mold, insects and underfermentation, he said. 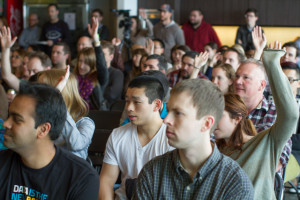 In Seattle and on the road, Theo uses a “bean guillotine” that dissects the cocoa beans to help determine quality. Nothing beats tasting, though. And “nothing is worse than a moldy bar of chocolate,” Palmer-Royston affirmed.

Zillowites had lots of questions, including how Theo’s chocolate differs from that of mainstream companies.

Although many of the processes are the same, Palmer-Royston said, the larger companies do not typically take time to tweak the processing to maximize cocoa flavors by region or by season. And not all of them include as much cocoa in their products as Theo.

Palmer-Royston, who came to Zillow with Kristen Dailey of Global Washington, simulated a Theo factory tour beautifully, right down to the free samples. But he encouraged everyone to visit the factory in person.

“You’ll get samples throughout,” he promised.